No Result
View All Result

LONDON — Having cast off from the European Union, Britain wants to bind itself closer to the United States in a perilous world, according to a long-awaited blueprint for its post-Brexit foreign policy, released on Tuesday.

Prime Minister Boris Johnson presented the document — which grew out of a lengthy review of security, defense, development and foreign policies — as an argument for how Britain will stay relevant globally. One way, he said, is to help the Biden administration face down challenges from Russia and China.

“In all our endeavors, the United States will be our greatest ally and a uniquely close partner in defense, intelligence and security,” Mr. Johnson said in Parliament. “We will stand up for our values as well as for our interests.”

The prime minister and his allies have long argued that Brexit would liberate Britain to act as an agile maritime power on the world stage — a concept they called “Global Britain,” in language more suited to marketing than diplomacy. This 100-page report was an effort to put some meat on the concept.

But it was notable less for highlighting the opportunities that await Britain than in stressing the need to prepare for a world of threats and foes. Cyberwarfare, nuclear deterrence, and pressure on China, Russia and other human-rights abusers — all will be unavoidable elements of Britain’s future role, Mr. Johnson said.

Among its specific commitments: a $32 billion increase in military spending that includes raising the cap on Britain’s nuclear arsenal from 180 warheads to 260, and a plan to deploy its new aircraft carrier, the Queen Elizabeth, to Asia, where it will reinforce the United States Navy in sending a deterrent message to China. 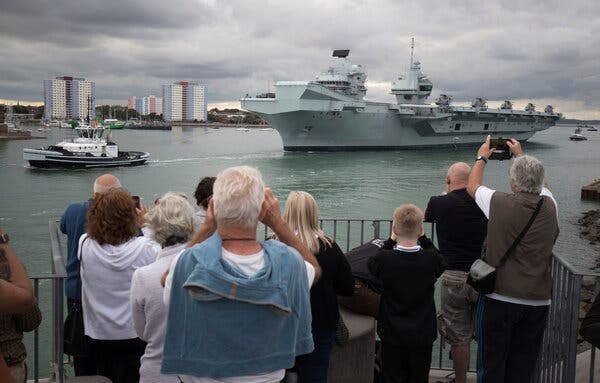 But the report also implicitly acknowledged the limitations Britain faces after Brexit. It says little about cooperation on security with the European Union, which remains its largest trading partner and the giant in its neighborhood. Since Britain and the bloc cemented their split with a trade deal in January, political and diplomatic ties have frayed, and there have been disruptions to trade.

In the report, Britain characterized China as a “systemic competitor,” language not dissimilar to that used by American officials. Russia, it said, remained a threat, three years after it poisoned several people with a deadly nerve agent in Salisbury, England, prompting a diplomatic backlash.

“It is structurally inevitable, given our other relationships, that we should turn to America,” said Simon Fraser, a former head of Britain’s Foreign Office. “For Biden, that is a big opportunity.” Still, he added, the review was a “serious effort to think through the risks and opportunities.”

Critics said some of Mr. Johnson’s initiatives seemed grandiose for a country that is now essentially a midsize power off the coast of Europe. The deployment of the carrier to Asia, for example, harkens to Britain’s imperial past, as does the government’s emphasis on rebuilding its presence in the Indo-Pacific region.

The prime minister took note of that criticism, insisting, “Global Britain is not a reflection of old obligations, still less a vainglorious gesture, but a necessity for the safety and prosperity of the British people in the decades ahead.”

An advertisement for Huawei products last year in a store in London.Credit…Teresa Eng for The New York Times

His aides pointed out that the Indo-Pacific strategy is a tilt, not a pivot, referring to the United States’ strategic shift toward Asia under President Barack Obama, which some analysts said never lived up to its billing.

The government said Britain’s interest is not nostalgic but focused on the future. Mr. Johnson has invited the leaders of Australia, India and South Korea to attend a summit meeting of the Group of 7 countries, which Britain is hosting in Cornwall in June.

Mr. Johnson plans to travel to India next month, his first foreign trip since the pandemic took hold. He also wants to join the Comprehensive and Progressive Agreement for Trans-Pacific Partnership, the trade pact abandoned by the United States after former President Donald J. Trump took office.

The transition from Mr. Trump to President Biden had once seemed fraught with risk for Britain. Unlike Mr. Trump, Mr. Biden opposed Brexit and has displayed little interest in pursuing a trade agreement with Britain. Mr. Trump had dangled a trade deal with the United States as a reward for Brexit.

But Mr. Johnson has worked hard to cultivate Mr. Biden, announcing policies on climate change and global health, as well as military spending, which dovetail with the priorities of the new president.

In November, Britain will play host to the United Nations’ climate summit in Glasgow, Scotland. That is expected to give Mr. Biden a stage to showcase the renewed American commitment to the Paris climate accord. Britain’s military spending is a fillip to NATO at a time when Mr. Biden also hopes to shore up the alliance.

But there are still places where Britain and the United States could part company. The lack of emphasis on Britain’s relationship with the European Union will disappoint some in the Biden administration, who are trying to revive international cooperation after the unilateral approach of the Trump years.

Britain’s decision to expand its nuclear arsenal may also cause tensions. In its last defense review in 2015, the government disclosed the numbers of missiles and warheads that it planned to carry on submarines. In this review, Britain said it would no longer give numbers for its operational stockpile.

“The decision to reduce the level of transparency on the U.K. nuclear stockpile will not go down well with U.S. officials who want to signal an openness to more progress on nuclear disarmament,” said Malcolm Chalmers, the deputy director general of the Royal United Services Institute, a think tank in London. “The U.K. decision on this would have been easier to sell to the Trump administration.”